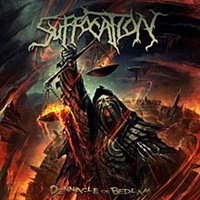 Flashback: 1990. My second semester of college and tape trading was in full swing for me, always seeking out new sounds from independent bands anywhere I could find them. A pen pal of mine from Virginia loaded up a 90 minute tape with a series of bands- one of which would be a three song "Reincremated" demo from New York act Suffocation. The sheer speed and heaviness floored me- the deep, gruff vocals matching the low-tuned, death musical insanity. Little surprise they took the underground by storm, eventually signing a long term deal with Roadrunner Records and attaining headline status by the time I got to see the band live in the mid 1990’s supporting their third album "Pierced From Within".

Losing track of their reunion years from 2003 forward, "Pinnacle of Bedlam" gives me a chance to reacquaint my ears with the current Suffocation style. Vocalist Frank Mullen and guitarist Terrance Hobbs are the mainstays through the early and current years- joined now by guitarist Guy Marchais, bassist Derek Boyer and drummer Dave Culross. While others in the genre would have possibly added commercial elements or maybe take their music off the deep end in terms of blitzkrieg technicality, the 10 songs here merge the expected flurry of blistering riff rampage and blast beats with this impeccable sense of mid-tempo punishing death grooves.

Opener "Cycle of Suffering" tears out from the first riff, setting the death roller coaster in motion. Dave uses a lot of progressive fills and almost jazz-like fluidity during the instrumental breaks of "As Grace Descends", contrasting the straight forward blasting and thrash moments of the verses and chorus. "Sullen Days" has a series of weird, dual guitar twists that navigate brutally against the main mid-tempo rhythms, almost harkening back to their early years with a tip of the cap to Voivod. The breakdowns are still drop on a dime killer- I would imagine some of the stop/start changes and timing in "My Demise" and "Beginning of Sorrow" aren’t something that you cook up in a couple of rehearsals and can play seamlessly from the studio to the stage.

Their style firmly established, Suffocation remain steadfast in their extreme approach- and that’s why they’ve maintained a loyal following decades into this business. Do not bother with the clones: invest in the original with "Pinnacle of Bedlam".