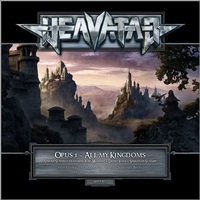 Van Canto mastermind Stefan Schmidt felt the time is ripe for a new German power metal project band, and as a result the debut album from Heavatar "Opus I- All My Kingdoms" is now upon us. Assembling top flight musicians such as drummer Jorg Michael (ex-Stratovarius, Devil’s Train), guitarist Stefan Schmidt, and bassist David Vogt, Stefan took a strong influence from many of his favorite classical composers and incorporated their themes into his nine original compositions.

Expect parts of Beethoven, Bach, Paganini, and Bizet to factor into material like "Replica", "Born to Fly" and the 11:23 "The Look Above"- paying homage in a respectful manner without going overboard on their influence. Musically Heavatar is pure in its power metal stance- Blind Guardian and Powerwolf would be two bands with vivid comparison: larger than life vocal choirs, variation between aggressive rhythms and then layers of orchestration where you feel like the lyrics are coming to life. It’s great to hear Jorg still pummeling his kit with double bass ferocity and this lightning quick fill work while also knowing how to maintain this propulsive groove factor- he has always been one of my favorite drummers in this genre and Heavatar proves his professionalism is still on high.

The closing cut "To The Metal" is a tribute to artists such as Manowar, Metallica, and Blind Guardian- Stefan taking a vocal approach like James Hetfield with his sinister sneer, while David’s bass is reminiscent of Joey DeMaio and when the song kicks into gear around the 2:54 mark you can sense this song could be a rally cry for audiences across the globe. Combining the killer music with an eye pleasing band logo and Middle Ages oriented cover art, let’s hope that Heavatar becomes as much of a priority to Stefan as his voice oriented Van Canto has been in recent years.

Shout, scream, pound your fists in the air- "Opus I- All My Kingdoms" fulfills every power metal fan’s dream in terms of outlook and accomplishment. Devour with your favorite meal and beverage and prepare for 48 minutes of non-stop entertainment.