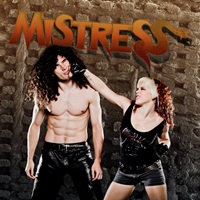 I received this only a month ago, but do not think that Philadelphia, Pennsylvania’s Mistress doesn’t deserve your attention with this late 2011 "Brains and Bruises" debut full length album. In existence since 2002, it wasn’t until the fall of 2009 that vocalist Deanna Gardas joined the band, and they’ve made a slow, steady ascension through their local ranks while recording this 10 song, 60 minute plus effort. Stylistically Mistress straddle the line of older power metal and hard rock, taking influence from a number of European and American acts with their slightly dramatic nature to their arrangements.

"Chase To Destruction" for instance has these dual guitar harmonies the evoke part Metallica/ part Iron Maiden thoughts, although the rhythms and tempo is more in line with traditional metal- as Deanna comfortably floats through her multi-octave range. In contrast "Break the Silence" is more in line with 80’s Scorpions meets Van Halen, especially with some of the guitar licks and tricks. The 8:24 "Loving High" begins with some fancy timing maneuvers from drummer Jesse Rucco while the guitars mutate between thrash-like crunch and odd, hypnotic transition work.

I do question some of the longer arrangements as the average listener who wants to get into an independent, self-released effort may not have the patience to sit through an 8-9 minute track (closer "The Road Warrior" clocks in at 9:33), but overall "Brains and Bruises" possesses enough firepower in the vocal and guitar departments to keep my ears abuzz for multiple engagements. This one could be for those who miss elements of early Cyclone Temple and Metallica if crammed headlong into some late 70’s / early 80’s traditional hard rock and metal acts.