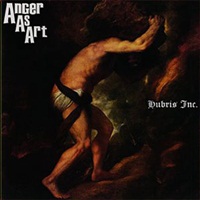 Many of the players within this California thrash band Anger As Art gained acclaim decades before with other prominent acts to those who follow the underground. Vocalist/ guitarist Steve Gaines was in Abbatoir, Bloodlust, and Tactics among others- fellow guitarist Danny Oliverio also played in Abbatoir. Drummer Rob Alaniz is known for his thrash and death work with Rise, Summoned, Evildead, etc. – while bassist Henry Delacruz is the relative newcomer, joining the band ranks in 2011.

Those that believe Anger As Art is purely one type of thrash would be sorely mistaken- as the 14 tracks on this fourth album from the band "Hubris Inc." run the gamut from mid-tempo, modern melodic winners like "Evil You Create" and the tip of the cap to older Black Sabbath with the "War Pigs"-opening drum passage in the otherwise straightforward freight train riff-o-rama that is "Anger Is the Reason" to the almost punk/death-like "Time Devours Life" and equally vicious "Pearls Before the Swine". Guest appearances come up in lead break form with Mark Caro (Abbatoir) on "Speed Kills" as well as Jim Durkin (Dark Angel) for "Rage and Retribution"- filled out with Stryper’s Tim Gaines on bass and Besty Bitch for vocals.

If I had to describe the band’s sound to the uninitiated, Anger As Art use Slayer, Dark Angel, and the previous speed work of Abbatoir while injecting elements of death and modern production to keep the band sharp as a battle axe. I love the weird moaning that occurs during the instrumental breaks of "Head of a Snake", and the furious rolls that Rob Alaniz puts down during "Never Forgive Never Forget". The musicianship and experience within the quartet should prove beneficial in terms of acceptance in a very crowded field these days.

This material should have no trouble translating from studio to stage. Fuel your mind and body, Anger As Art is ready to strike!