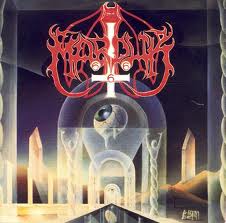 Ok, so many of you have heard Marduk’s ‘Dark Endless’ debut before, but this is the 2012 reissue by Century Media. This version contains six bonus tracks, including ‘The Eye of Funeral’ intro, which didn’t make it on to the original release and has been fully remastered.

I don’t own the original, so I can’t compare the production on the two, but I can tell you that this version has a very clean, clear sound. The guitars are scalpel sharp on the leads, but have a doomy quality that brings a certain band of Swiss progenitors to mind. ‘Dark Endless’ marked the debut of vocalist Legion, and although he wasn’t the most iconic frontman, many out there love his work and I can see no reason to argue with them.

The interesting thing for fans of modern Marduk to note is how pervasive the death metal influences were in the band’s early days. It was only later that they developed that icy aggression that became their trademark.

In terms of song-writing ability, ‘Dark Endless’ certainly comes across like a first album. Rather than a dynamic composition, each time we get a random collection of riffs strung together like gobbets of flesh on a demon necklace. There is a charm to the energy and enthusiasm with which the band approached their craft, but they certainly weren’t going to win awards for how well they could put a piece of music together. Having said that, this exuberant approach is probably the album’s strongest plus. Each song seems to have dozens of high quality riffs and they come at the listener thick and fast. The Marduk of 20 years ago definitely meant business!

Whether or not the bonus tracks add much value is debatable. Mostly live tracks from 1990 and 1991, they are pretty rough in places, but who is to say fans of the band won’t appreciate them? Ultimately, if you ever wanted to pick up this album, now looks like a pretty good time. ‘Dark Endless’ gives an excellent picture of Marduk as they took their first steps to becoming the monster they are today.