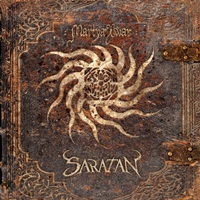 Rising up the ranks from My Kingdom Music to Massacre Records, Polish death/thrash band Saratan appear to add a couple of fresh twists to their style plate on this third album "Martya Xwar". Oriental instrumentation enters the scene on a few tracks, intertwining with the conventional electric parts on "The Sacred Path of Martya Xwar" that sends a pattern interrupt that works well for the group. Vocalist/ bassist Jarek Niemiec employs more of an industrial edge to his normal thrash delivery, combining the despair of Max Calavera with Tommy from Prong, Robb Flynn of Machine Head and Burton C. Bell from Fear Factory.

"Mastema" may start off with female chanting but the pulsating energetic drumming and blitzkrieg double bass kicks from Michal Stefanski takes Saratan into pure windmill whirlwinds, and the follow up "Venomous Disease" contains a series of stair step frantic riffs that Adam Augustynski peels off as if in Slayer meets death nirvana- including some sick leads full of every dive bomb and grenade blowing trick in the book.

Not everything on this album is full throttle death/ thrash though. Saratan can slow down for more than a breather and inject some haunting keyboards within the mid-tempo Machine Head like "Ba al Zevuv" with one of those hypnotic low tuned riff crunches that is almost industrial in execution while still being totally in the metal camp.

Expansion is necessary for the career longevity of any band. I believe Saratan aren’t trying to water down their death/thrash roots- they only wish to add these extra flavors and spices to broaden their creativity. The trio still know how to be full out intense (check out "God That Disappears"), but this Oriental influence helps keep "Martya Xwar" out of the delete/ dump pile. 36 minutes later, I’m betting many will submit themselves to the full record experience without hesitation.