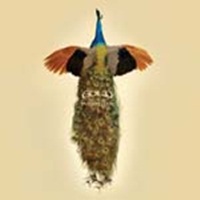 Retro rock seems to be in vogue in many European countries these days. And as long as the musicians behind the movement appear to be sincere in their approach, I’m all for it. We need real musicianship, blood, sweat, and tears to come out of the young rock scene, or we will have to depend upon faded glory and 30-40 year old albums to treasure. Gold call Rotterdam, The Netherlands home, forming in 2011with singer Milena Eva and ex-The Devil’s Blood guitarist Thomas Sciarone as second guitarist Nick Polak, bassist Harm Haverman and drummer Igor Wouters round out the quintet. "Interbellum" as a debut album channels soul, rock and this passion that you don’t get very often from new bands in the scene- using a mix of European and American mentors as inspiration for the mark they make.

The jangly riffs with a mix of Southern flair within "Dreams" take the best of Northwestern act Heart with a touch of Vanderbuyst’s charm while Milena’s vocals have this silky smooth comfort a la 70’s female stalwarts such as Stevie Nicks or Ann Wilson. The off-beat free flowing percussion work in "Medicine Man" features Igor’s adept cymbal to snare timing and some killer fills in the instrumental sections that meld amazingly to the dual rhythms and lead break. The seven minute closer is a slow building epic number, the opening riff and vocal slithering like a stealthy snake awaiting its prey in a Deep Purple meets Led Zeppelin effort- producer Willem Verbuyst (Vanderbuyst) contributing a guest guitar solo to this one.

Gold possess one of those styles that may not turn heads in amazement initially, but I think with continual exposure they can get the feet tapping, the hands clapping, and a great cross-section of males and females who just want to let loose and rock the house. Keep the ale flowing when listening to this one.