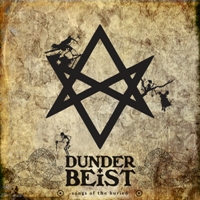 ‘Songs of the Buried’ is the latest full-length from thieving bastards Dunderbeist. Behind the raccoon thief masks lurk some pretty savvy musical minds. Dunderbeist lift, steal and borrow elements from other acts – a lyric here and a riff there, but to be honest it all sounded pretty original to me!

The sound presents an amalgam of styles. The heavily layered guitars remind me of Alice & Chains’ ‘Dirt’ in places or ‘Queens of the Stone Age’ on steroids. Round about now, they are touring with Devin Townsend, so if you think of his more rocking numbers and the industrial but epic edge he brings, you’ll get a close idea of what Dunderbeist have to offer.

‘Songs of the Buried’ has well-crafted grooves and hooks will have feet tapping and heads nodding all around, regardless of listeners’ predilections and prejudices. An easy one to recommend.