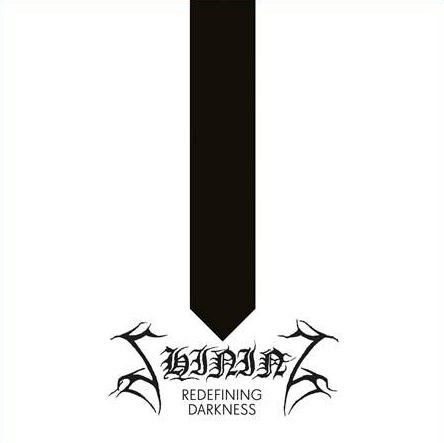 After many small releases and rereleases since signing with Spinefarm Records, Shining finally released their eighth studio album, "Redefining Darkness". Shining is better known for vocalist Niklas Kvarforth’s behavior on stage and his rather provocative appearance in the written and
audiovisual musical media, but the music has been rock solid from the first record. With that in mind it was with great anticipation and risk of disappointment that I sat down with the album.

Redefining Darkness starts with a blow to the face with the song "Du, mitt konstverk", and those who believed that Shining has moved away from the black metal genre should probably think again. It oozes with references to the earlier releases and Scandinavian black metal in general. Do not think the album is a step back to a bygone era. Redefining Darkness does exactly what the title implies, and if you are stuck in a particular genre, you should probably define your own musical standpoint to get the full benefit of this album.

There’s probably a greater connection between everything that has been released through Spinefarm than one would think (the album "VII – Född förlorare", the single "Förtvivlan, min arvedel", the EP "Lots of girls gonna get hurt", and the collection of Kvarforth’s other projects and guest appearances). One might say that there has been a preparation towards this album where you get a larger proportion of acoustics and clean vocals compared to Niklas more famous snarling and aggressive vocals and a dark heavy sound. For those who have compared the "IV-The eerie cold" with bands such as Opeth will probably find this album even closer to their genre, which the song "The ghastly silence" emphasizes more than anything else.
The distance is short between metal and more jazz-inspired acoustics, pop and the other genres you really would not expect.

However, this is still Shining, and those who are familiar with previous
releases will find a familiar sound and composition. The song "Hail darkness Hail" is full of Shining’s signature and could easily been published on any of the previous albums, even if you suddenly find yourself in a pop-rock-like middle section that could have been played on any radio
station. It is an insane versatility throughout the album, and each listening reveals something new.
"Det store grå" continues a tradition that is found on almost all of the Shining releases, a longer piece of melancholic piano/acoustics before the big finale. That is exactly what you get with "For the god below". The song may not be as aggressive as the closing tracks on previous albums, but it’s a damn heavy track with vocal harmonies, elaborate guitar solos, including one of Andy La Rocque. A song that contains everything you really want from a band like Shining.

This is without doubt one of the best albums this year, if not the very best, and it deserves its place in any CD or record collection no matter what genre you prefer. This is a masterpiece of composition, atmosphere and musical duality. A bridge between genres, but also a further strengthening of its position in a genre of their own making. A genre where no one is even close to matching what Niklas, Peter Huss and Christian Larsson delivers. I am forced to roll the dice, so there are six eyes staring back at you. But don’t take my word for it, do yourself a favor and go out and buy the album. This album deserves not only to be played, but to be on repeat until the next Shining release.

The album can be bought from http://www.shininglegions.com