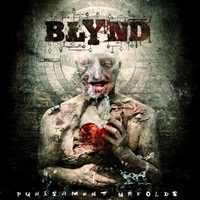 Cyprus metal act Blynd has been working on their craft since 2003, developing a style with one foot in the older thrash realm while also incorporating modern stomp, groove and down tuned philosophies. "Punishment Unfolds" is their second album and first to grace my ears- and I have to say they do possess many admirable qualities in terms of their songwriting construction and fluid soloing techniques.

Dino and George as guitarists throw down a bevy of triplet and speed picking parts, dazzling the brain with their trilling on the instrumental section of the Metallica meets Machine Head effort "Never for the Fallen". Drummer Alex feels just as adept at the slower, more groove oriented beats as he is blasting away- both of which come up on another highlight "Convicted in the Devil’s Land". Bassist Andreas also doubles his band duties as the vocalist- and his delivery has that semi-growl meets burst the blood vessel roar that should appeal to those into European thrash just as much as fans of Pantera, Gojira, and Sepultura.

Are there times where I wish Blynd wouldn’t go for the obvious half-time measure change that probably meets with sound circle pit approval live? Of course- but I think "Punishment Unfolds" is much more musically savvy than 90% of the acts who combine thrash with a modern feel so we can forgive them for this slight error of ways. Besides, the dual leads in "Arrival of the Gods" with all the shredding and dive bomb tremolo antics will delight the metal hero in all of us- and I believe Blynd could go places as they offer plenty of creativity and execution on this record.

Neck snapping anthems abound, and in the end isn’t that what great metal should produce?