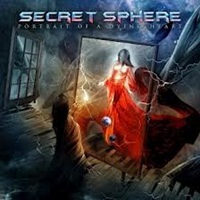 "Portrait of a Dying Heart" – the seventh album for the Italian symphonic power metal act Secret Sphere- comes with a new beginning. When you lose the only vocalist you’ve known since 1997, adjustment can be difficult for the remaining members just as much as it will be for the fans. Founding guitarist Aldo Lonobile took the search seriously as the voice of Roberto Messina is one of sustainable power and control, so he didn’t want to hand the reigns over to just anyone. Enter Michele Luppi- probably best known for his work in Vision Divine for 5 years, and there’s no question his soaring falsetto and smoothness in texture will be up to Secret Sphere standards.

Rather than open with a vocal track, the 5:58 instrumental title cut leads the proceedings- a mid-tempo offering with a progressive touch in the Dream Theater vein as Aldo, fellow guitarist Marco Pastorino and keyboardist Gabriele Ciaccia alternate with their lead spots and riff shifts. By the time song three "Wish & Steadiness" flies by, I’m stunned that Michele seems to have worked harder on adding an aggressive lower edge to some of his verse work without losing his highly regarded upper echelon range. Musically Secret Sphere explore a much broader range of contrasts with their sound on this record- "Union" for instance has this acoustic guitar opening that segues into a heavier, slightly alternative feel that then drops into a prominent low end bass leading the way as the keyboards swirl in 80’s fashion.

As a band the sextet prove that you don’t have to play at blistering paces with persistent double bass or multi-layered vocal harmonies to be the best at melodic power metal. For every heads down speed number like "Secrets Fear", you’ll get the dichotomy of electronic trance keyboards circulating against Evergrey meets Metallica guitar crunch within "Healing", or the tender ballad "Eternity" with its restrained verses and Michele’s expressive passion and heart through his phrasing and delivery that recalls his solo AOR work.

A nice continuation of last year’s "Archetype", Secret Sphere will lose no ground in their fan base with this fine record. Should go over like gangbusters in all power metal nations.

VICIOUS RUMORS – LIVE You to Death