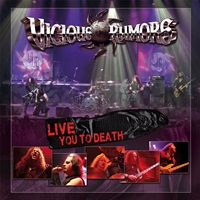 VICIOUS RUMORS – LIVE You to Death

The California power metal veterans Vicious Rumors toured consistently last year in support of their fine "Razorback Killers" album- performing 92 shows in Europe including a lengthy opening jaunt for Hammerfall. "LIVE You to Death" is a document of one of those shows in December of 2011, consisting of 9 live tracks plus 2 studio songs covering classics that showcase where some of their influences come from.

Current vocalist Brian Allen has the potent pipes and personality to carry the old Carl Albert spirit forward- and add his own take on new tracks like "Let the Garden Burn" and "Hellraiser". Those in Europe who helped put "Digital Dictator" and their self-titled album near and dear to their classic hearts will also be happy to hear long-time favorites such as "Down to the Temple", "Minute to Kill" and "Don’t Wait for Me". Geoff Thorpe puts a lot of the shred clinicians to shame- because in the end a memorable solo isn’t about a thousand notes in an eight bar measure, it’s about feeling and diversity.

Which two songs did Vicious Rumors choose as tributes to the past- "Sign of the Southern Cross" and "Running Wild" from Dio-era Black Sabbath and Judas Priest – reaching back to the early formative years of the group. The former keeps the epic, timeless arrangement respectful, while the latter gives Larry Howe a chance to use more of his powerhouse percussion skill set and Brian’s fiery delivery.

There are good times for Vicious Rumors. Embrace this chance to relish their new output, while understanding their place in the US metal scene.

ORDEN OGAN – To The End