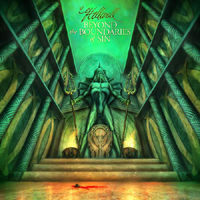 HELLWELL – Beyond The Boundaries of Sin

‘Beyond The Boundaries of Sin’ is the brainchild of Manilla Road front-man and legendary axe-wielder Mark Shelton and keyboardist EC Hellwell. Those of you who find the latter name familiar should note that EC is the current bassist with Manilla Road, making his debut on 2012’s ‘Playground of the Damned’.

So no prizes for guessing what this one sounds like – think of Manilla Road’s heavier double bass stuff and add a large helping of Jon Lord inspired keyboards and you’ve pretty much got it. The lyrical and stylistic concept behind the record is epic Lovecraftian horror served up with progressive and doom metal elements.

Those familiar with Shelton’s work will know already that he is the master of catchy riffing who has no problem pulling an impressive solo out of the bag. His nasal vocal style can be an acquired taste, but fits perfectly with the music and the fact that each song is part of a larger narrative in a genre I adore gets the thumbs up from me. The keyboards work too, sometimes amping up the horror and at other times wrestling with the guitar lines with the extended middle eight sections.

‘Beyond The Boundaries of Sin’ isn’t without its faults though. The production seems to compress the overall sound so that it feels as if the album was delivered through a tight tunnel, rather than some vast and crumbling theatre. On top of that, there are a few ‘ordinary’ riffs here and there that will probably prove forgettable in the long run.

Ultimately though, this is one that could easily have been released under the moniker of Manilla Road, so fans of that band will want to pick it up and despite its shortcomings, this is an enjoyable slab of horror metal that would serve as the perfect background music for a session of Call of Cthulhu.