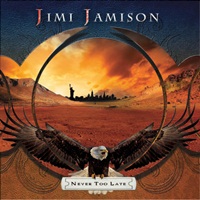 Voice of the Baywatch television show theme song- most notable for his years fronting the AOR sensation Survivor (of which he’s back for another go around)- Jimi Jamison at 61 appears to have taken great care to preserve his golden voice for melodic rock. The last few years have seen releases with Toto’s Bobby Kimball, former Survivor keyboardist Jim Peterik, and a 2008 solo record "Crossroads Moment" that met with fan and critical acclaim. "Never Too Late" is the latest 11 song album – featuring high caliber songwriting and performance contributions from Erik Martensson (W.E.T., Eclipse, Toby Hitchcock) on guitar, bass and keyboards along with Jonas Oijvall on piano and organ, Magnus Ulfstedt on drums and Magnus Henriksson performing lead guitar on two tracks "Street Survivor" and "Heaven Call Your Name".

"Everybody’s Got a Broken Heart" starts the proceedings in fine, energetic fashion- the piano and guitar riff very uplifting much like Jimi’s best work with Survivor on "Vital Signs" and his solid, soulful melodies still resonate as in his 80’s glory days. The title cut is one of those commercial oriented, mid-tempo arrangements with the right guitar accents and softer keyboards while the rhythm section plays at a straightforward, toe tapping rock steadiness. And what Jimi Jamison album would not be complete with a few ballads- a chance to stretch your emotions and pipes about the subject of love and relationships- of which "The Air I Breathe" and organ-driven "Heaven Call Your Name" are two distinct and appealing offerings.

I think Erik’s understanding of working with Jimi’s strengths makes the songwriting cross the lines of his AOR excellence with the benefit of modern production technology – and in the end this is one of his best works in at least 20 years. Heavy rock with brilliant melodies- when the musicianship, songwriting, and execution match up- it’s a pure win for the listener. It’s "Never Too Late" to make a mighty impact- and Jimi Jamison proves melodic rock excellence is not relegated to a pure youth movement.