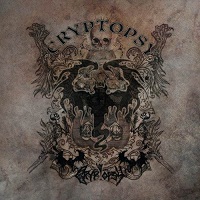 Cryptopsy‘s seventh release does everything opposite of their 2008’s release, "The Unspoken King". This is Cryptopsy back to their trademark form (well not their "None So Vile" form, that album is yet to be matched). This self titled album puts the death back in their music and after a couple of spins its actually quite good. The Canadians have an impressive back catalog and its therefore pleasing to listen to "old" Cryptopsy again. The massive production hammers you with blast beats and merciless riffing at max speed combined with a fitting vocal. Vocalist Matt does an impressive job (he is of course no Lord Worm) but he manages to deliver the brutality needed to keep it interesting all the way. Another aspect that makes "Cryptopsy" listenable is the complex structures and arrangements that manage to stay fresh all the way and not grow old and repetitive.

Flo Mounier is THE death metal drummer and he proves it once again here. His abnormal time signature combined with complex intensity is just awesome. He’s been a part of Cryptopsy all the way and its not a Cryptopsy album if he’s not playing on it.

To sum it up, Cryptopsy is back with a vengeance after the deathcore effort called "The Unspoken King". Enjoy!