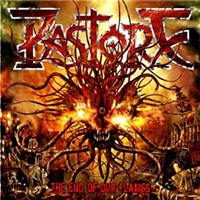 PASTORE – The End Of Our Flames

Brazil has always been a favorite touring spot in the hard rock/ metal community. So many major artists have related tales of the large festival crowds and passionate audience feedback, and it is not surprising that Iron Maiden, Megadeth, and Rush have all filmed professional videos through the years capturing some classic live performances. In the spirit of traditional artists like Iron Maiden, Judas Priest, and Iced Earth, the four piece band Pastore appear to be gaining a foothold with their powerful songs since their start in 2007, releasing their debut album "The Price for the Human Sins" in 2010 which received acclaim in the Far East who revere soaring, in key metal melodies and heavy, classic driven riffs.

Two years later the follow up "The End of Our Flames" hits the market, armed with a new European record deal and ready to impress with 11 more songs that will not disappoint the traditional heavy metal minded. Vocalist Richard Pastore has a similar intonation and way of trailing off certain melodies in his verses like one of his heroes Bruce Dickinson- the song "Envy" for instance has a similar quality to not only "The Number of the Beast" but also the chorus appears to have a quality like Bruce’s solo work with Adrian Smith of the mid to late 90’s. Bassist Alexis Gallucci performs some subtle up front lead break work as well from time to time- proving that you can have virtuosity with lower frequencies and maintain a solid rhythm element. Guitarist Raphael Gazal has a darker edge to his riffs, which I think helps Pastore gain more of a modern crunch to material like the doomier "Unreal Messages" or ripping "Night and Day".

The band excel at multiple levels: the heads down, Iced Earth-like driving title track opener gives drummer Fabio Buitividas a chance to flex his tempo juggling and competent double bass skills, while "Brutal Storm" and "Brings Me to Peace" appear to have more of that cross section of current Helloween power spirit and a touch of "Painkiller" attitude. The futuristic cover art and smart production values bring the total package home to my ears and eyes.

No sophomore slump here. Much more straightforward than fellow country-mates Hibria, Pastore will fit those who love great traditional metal with addictive melodies.