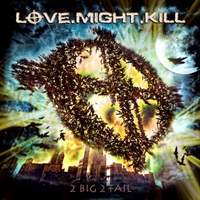 Congratulations are in order for drummer Michael Ehre. He recently gained one of better slots in power metal by becoming the new drummer for German heavyweights Gamma Ray. On the heels of this announcement comes the second studio album from his melodic metal outfit- who impressed me very much last year with "Brace For Impact". There are many elements on "2 Big 2 Fail" that remind me of the slithering, bluesy John Sykes/ David Coverdale times when the self-titled 1987 album rocked North America and sold in the multi-millions, along with this brimming confidence and knowledge in constructing solid metal songs- not just interchangeable riffs all played at the same tempo.

What does this mean for the listener? You’ll sink your teeth into the immediate building chord progression of "XTC"- the rhythms insisting for audience call and response reactions along with the multi-part engaging chorus vocal harmonies. The guitar and keyboard point/ counterpoint tension delivers Savatage circa "Gutter Ballet" chills on "The Perfect Mistake", as vocalist Jan Manenti navigates deftly between lower melodies for the verses and holding out some AOR meets power metal upper register sustenance during the chorus and bridge. The faster material like "Burn the Night" and "We Fall" has many overtures to Michael’s previous work with Metalium- blazing guitar lines from Stefan Ellerhorst and Christian Stover, faster double bass and heroic Dio-like vocals. And who can forget the bluesy note tweaks a la "Crying in the Rain" for the slower, swanky "Home"- one of my favorites that could remind people also in some respects to Zakk Wylde’s work in the song "Perry Mason".

Michael’s skills as a songwriter should be as high on the notice scale as his professional drumming abilities. Love.Might.Kill weaves in a classic 80’s framework with elements of Pretty Maids, Ozzy Osbourne, and the aforementioned Savatage/ Whitesnake to create a blockbuster second effort. In the right world, his higher profile gig with Gamma Ray will now siphon followers to this well-conceived and executed melodic metal outfit.

Let’s hope during Gamma Ray’s downtime Michael can pull together a third Love.Might.Kill release- the world needs more of this sound.