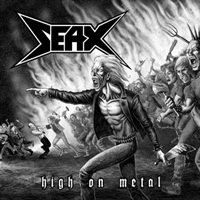 It’s awesome when a local band in my area gains the chance to move up the ranks. This debut album "High On Metal" from Massachusetts traditional/ speed metal band Seax originally hit the streets as their own self-financed independent release. EBM Records likes the upside potential of their sound, and now will be re-issuing the product for a wider marketplace. The band certainly adhere to the old school metal game plan with these 9 songs- production values that resonate with a live, punchy feel, and quick hitting songs that reach for power and speed without extraneous waste of time or space.

Acts like Exciter, Razor, Agent Steel, and Raven are four of the bands that come to mind when I take in fast and furious cuts like "Molten Iron", "Heavy Metal Seax", and closer "Need For Speed". There is a little bit of a punk edge as well to certain drum tempos and riff changes which I think embellishes the youthful spirit and adrenaline that fuels the movement. Matt C. Axe on bass is just as comfortable being up front in the mix and keeps an energetic presence on a standout like "Carry the Torch" where Seax is willing to shift tempos mid-stream and provide a couple of certain audience chant moments when performing this live.

Carmine Blades as a vocalist has an affinity for the NWOBHM and early to mid-1980’s singers who may not necessarily possess pitch perfect melodies but packed quite a wallop with their passion and ear-piercing screams. "Livin’ Above the Law" for instance gives hints at Paul Di’Anno as well as John Gallagher and Dan Beehler in Carmine’s spitfire delivery. And if the front cover art doesn’t give you an insight into the band’s sound (pitchforks, leather, bullet belts and rage) than you must remain clueless.

We need more of this sound to develop again in North America and bring to the world. "High On Metal" is a must for those who miss old school speed metal in 2012- and Seax could have a long, successful run with this sound (especially those who love the history of metal).

BEYOND THE GATES – Day 3 – Bergen, Garage