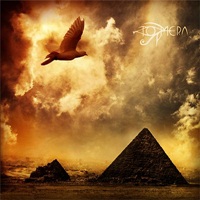 These are uneasy times in the music industry. As the model changes all parties involved in the scene scramble to sustain a living at their respective careers- and you often see band members wearing multiple hats to not only control costs, but also the creative and promotional control when it comes to your ‘brand’ or style. Guitarist Tom MacLean of UK progressive metal act To-Mera decided after two albums with the conventional label contract on Candlelight Records to start his own independent label Illusionary Records- as a model of focusing on progressive music artists.

"Exile" is the first release from Illusionary and the third album for the quintet, who have already impressed me based on their previous two releases for their innovative mixture of progressive metal, rock and alternative/ fusion tempo changes and chord movements. You want an explosive death metal vocal bridge and blast beat combination in the middle of 70’s organ solo parts: check out 5:07-5:20 of "The Descent". How about a 10 minute epic song that opens with sparse clean acoustics, an ominous bass line and then this low rumbling electric riff combination straight out of classic Evergrey philosophy before the slithering exotic melodies from Julie Kiss mesmerize your totality- that’s "Broken" in a nutshell.

To-Mera excel at knowing when to let segments breathe so to speak and not overpowering the arrangement with technical prowess: that it’s acceptable to allow a great riff, piano part, bass line or drum groove to carry on longer than a 4 or 8 bar measure. Two great examples of this dynamic include the 7:21 "The Illusionist" which is a mid-tempo number with darker chord progressions and occasional variance into funky/ fusion elements with the bass highlights of Mark Harrington and crunchy "End Game" that could gain cross appeal from the extreme metal fans as much as conventional progressive metal followers. At 8 tracks and over 65 minutes of music, To-Mera insure maximum entertainment for your exchange in time/ financial investment for "Exile"- and I feel that this is another bar setting release because of the smoothness and fresh approach.

Not one particular band comes to mind to encapsulate To-Mera, and that’s the best compliment I can pay in a progressive metal world of Dream Theater sound-a-likes or musicians reaching to impress with virtuosity instead of painting full sonic pictures. Their intercontinental musical palate means the listener wins- "Exile" is that great of an album.

PASTORE – The End Of Our Flames