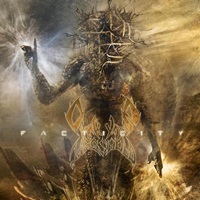 Progressive death metal can be a challenging genre to navigate. When does something become too abstract to latch onto, resulting more in a lack of sonic separation than actually delivering impressive songwriting? Should the musicians extract every minor time change and dexterity finger/ chord tricks in their repertoire? I appreciate intelligent phrasing and innovative approaches in metal more than most- however as I concur with Grave vocalist/ guitarist Ola Lindgren in a recent phone interview, if the riffs do not maintain some semblance of a hook that leaves a lasting impression, all your technique and application of mathematical theory can be flushed in your nearest toilet.

My current case study is with German quintet Over Your Threshold on their 9 song debut album "Facticity". Forming in 2006 and finalizing their first lineup in 2009 with fretless bass maestro Christian Siegmund, they self-released an EP "Progress In Disbelief" in 2008 while seasoning their live chops opening for Obscura, Deadborn, and Hokum among others. "Facticity" has more in common with an older death approach, the progression part coming out more in the rhythm section where Christian’s bass popping and note jumping often takes the lead and drummer Julian Matejka keeps up with Mark Zonder cymbal attack precision one moment, then insane thrash meets blasting capabilities the next. Artists like Death, Toxik, early Death Angel and Sepultura come to mind easily on punishing tracks like "Self Exhibition" and "Abdicated".

New vocalist Ludwig Walter has a vicious, low tuned raspy voice that has no trouble keeping up with the shifting proceedings- be it an all-out musical assault or in times of calm restraint- and he’s also discernible, a rarity for most progressive death metal groups. A lot of the groove and melody comes directly from the guitar riffs, harmonies, and tradeoffs that Kilian Lau and Lukas Spielberger employ- picking their spots carefully to dazzle in "Body Part Illusion" and the closing title track for instance while maintaining great thrash/ death instincts and proper jazzy transitions.

43 minutes that doesn’t exhaust my brain- Over Your Threshold prove that it’s not about cramming 5,000 notes and 6 time changes in 8 measures to astound the listener: that impact happens with a color palate in varying shades of contrast.

ETERNAL ESSENCE – A Light in the Distance