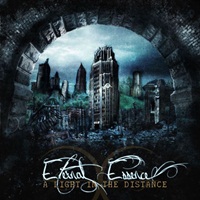 ETERNAL ESSENCE – A Light in the Distance

Taking the jump from an instrumental progressive rock outfit to a full fledge vocal outfit may be murky waters for some artists- but not for New Jersey’s Eternal Essence. Recording four instrumental albums during 2005-2010, vocalist Maria Vastano enters the fold to hopefully expand their following- and the contrasts between their conventional stance and her obvious affinity for more alternative/ modern rock mentors is obvious right from the get go. "Rise Above" and "Within A Dream" allow Maria to soar into Evanescence meets Staind territory, wrenching out the opposites of pain and excitement, tenderness with restraint as she prefers a slightly high range.

Instrumentally Eternal Essence isn’t overly technical with their parts- keyboardist Greg Rosenbilt often uses sparseness and a series of different tones to create sonic tension, most obvious in the 7:26 "Riven" with its darker ambiance. "A Tragic Subconscious" at 13:37 represents the epic song on the album, running through a variety of spirited instrumental sections and sound bites with drummer EJ Luna’s rhythm chops put to the test a la Mike Portnoy during the middle section of the arrangement, providing cat and mouse fare against Gary Hoffman’s guitar licks. Most of the 11 tracks do not overstay their welcome- with the average song keeping a 5 minute timeframe.

Self-financed albums as ambitious as "A Light In The Distance" may have minor flaws- and I believe the production is adequate but could have been a bit stronger in the drum tone department- but overall Eternal Essence know their material and their style very well. Maria’s vocals could give Eternal Essence a chance to grab a much more diverse audience- so those of you into progressive rock with a slight Dream Theater edge, this could be your sleeper hit of the season.