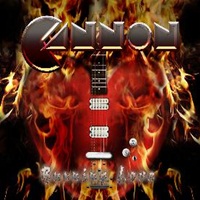 Hannover, Germany’s Cannon originally began as a five piece metal act in 1986, releasing their debut album "Thunder And Lightning" in 1988. Label struggles and stolen master tapes would eventually signal a downturn in the band’s longevity, leading to a break up in 1996. They reunited in 2003 as a four piece, with guitarist Walter Mueller moving to the drums. They’ve been actively recording new albums and re-releasing those original efforts- with "Burning Love" being their latest batch of original songs.

Stylistically, Cannon is a more melodic version of Accept if given a Bonfire outlook. The guitars have a powerful sheen, Walter plays a steady double bass with solid groove instincts and vocalist Mat Rein Jaehnke sounds similar to current Accept singer Mark Tornillo with his patented sneers. Occasional flashes of classical movements come into play with the guitar solo instrumental "Bachrock", and in general most of the arrangements stay in a mid-tempo anthem feel- where songs such as "Guardians Of The Night" and "Heads Up With The Devil" feature the syncopated riff moves and gang choruses that are decidedly Teutonic.

There’s something about the digital production that sacrifices a little punch for the sound of Cannon- it’s as if the guitars are all high end and the lower range is non-existent which could help the impact of "Holy Devil" or "A Light In The Dark". "Burning Love" has all the traditional tools one would expect from this style… if you didn’t have to provide your own frequency modulation. You may wish to seek out some samples before taking in the full course.

PHANTOM-X – The Opera of the Phantom