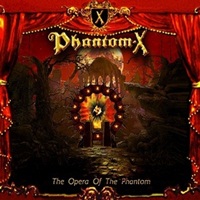 PHANTOM-X – The Opera of the Phantom

Love the play on Iron Maiden’s infamous classic song with the title of this fourth album from Texas traditional metal act Phantom-X. Those who long for the days of early Dio, Savatage, and Metal Church will find plenty to savor in the heads down sounds, searing leads, thunderous rhythms and multi-octave melodies within these 16 tracks. A concept album with a theatrical and horror driven theme, be aware that 9 of these songs have been previously released on their three earlier studio albums- but given stronger production values and a heavier tone than their earlier incarnations.

Early in the album a song like "The Mask" contains that sinister, dark Criss Oliva-like power chord combination from guitarist Bill Engfer along with the persistent double bass thunder from drummer Reece Stanley that you can’t help but headbang to. Amongst the seven new cuts, "Deep Six Down" wastes no time asserting its Riot-like power sequences, vocalist Kevin Goocher reaching his upper range easily and also delivering some sinister lower tinged action a la Dickinson, Dio or Jon Oliva. Another highlight is "Cloning The Christ"- the gang vocals and doomier tempo feel evoke a conquering feeling within my mind and body. It’s very fitting that "Your Majesty" pays tribute to the lifelong legacy of the late Ronnie James Dio, combining his best work in Rainbow, Black Sabbath and solo albums in a compact, 3:32 foundation.

The four-piece live for the old school- a time when it was okay to marry imagery with output, creating tension with outside keyboard buildups and supplemental dialogue that enhances the final recording.  Close your eyes and you’ll feel like you take a trip back a good 25 years with "The Opera Of The Phantom"- and the results should be pleasing.