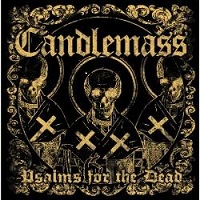 Every story has a beginning and an end. In the story of Swedish doom metal legends Candlemass the beginning was “Epicus Doomicus Metallicus” (1986) and the ending is “Psalms For The Dead”, according to the band themselves. Candlemass could have done like fellow doomsters Saint Vitus did in 1995 and invited back their original singer for a final masterpiece. After all, “Epicus”-singer Johan Längquist has done many guest appearances with Candlemass recently. But what “Psalms for the Dead” does is really to continue where the previous album left of.

The album opens with a riff so deeply rooted within the trademark Candlemass sound that you could almost wonder why they haven’t done it before. This heavy intro is followed by a change in tempo similar to the classic song “Mirror Mirror” from 1988s “Ancient Dreams” and from there on the album holds a steady pace. Rarely as fast as some of the songs from the recent albums, but most of the time more upbeat than the material they are most known for. The biggest change this time around is the increased use of keyboards. There has been the occasional use of keys since the very first Candlemass album, but where they used to be an extra element during certain sections on the earlier albums the keyboards are now heard most of the time in more or less every song. They do however stay in the background and only rarely take the lead. The big difference is that they are used more and are more audible. Particularly in the song “The Lights Of Thebe” where the ambient keyboard sounds are reminiscent of Rainbows most epic moments and the organ heavy “Siren Song”, complete with a Hammond solo.

Despite his obvious vocal qualities, Robert Lowe has had a hard time realizing his true potential in Candlemass. Where he really shines in his other band Solitude Aeturnus, he comes of sounding like a confident heavy metal singer in Candlemass, but rarely much more than that. There is the occasional part where he pushes his voice into a high register without going into falsetto, which is amazing, and he is also quite good at the more mellow parts, like the verses in the title track. A musician that has truly improved with age is lead guitarist Lasse Johansson. His leads are well played and at the same time quite tasteful. The small lead breaks in the surprisingly catchy single track “Dancing In The Temple (Of The Mad Queen Bee)” are intense, while the solos following the choruses in the title track perfectly understates the emotions within the song.

Aside from the increased use of keyboards, the album doesn’t really have much new to offer. The already mentioned catchiness of “Dancing In The Temple” and the ballad like title track are the biggest surprises. The other songs are mostly solid, but repeating choruses consisting solely of the song title, like in “The Sound of Dying Demons” and “Waterwitch”, can be tedious. The biggest question when a band chooses to do its last album is of course the final song. Will it be an epic conclusion or just some random mess? “Black As Time” opens with a one and a half minute long monologue about the cruelty of time’s flow, performed by some voice actor. This guy makes another short appearance in the middle of the song. I get the idea, but it breaks the musical flow during this last part of the album. The music in this song is actually quite good, but the use of voice acting sounds clumsy. For what might be the last Candlemass-song ever, I was hoping for something a little more elegant of an ending.

And so, Candlemass ends their recording career with what should simply be considered a decent follow up to 2009s “Death Magic Doom”. This is not the overtly epic swansong that some might have hoped for, but rather than raising the bar too high, Candlemass does something that they know they can pull off and that they seem to enjoy. That might have been the wisest choice.