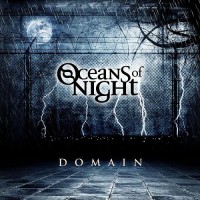 I received an album late last year by a band called Oceans of Night. When I say received, I actually mean to say that I requested this album from the bands headmaster Scott Mosher. This album has been lying in my desk drawer ever since it dropped into my mailbox all those months ago, and despite numerous friendly reminders from Scott Mosher himself I never seemed to take the time to sit down and write down my thoughts about Oceans of Night latest offering Domain. Finally, on a cold August morning I took the time and here are my thoughts.

The album starts off with the mini album ‘Domain’. I say mini album cause the track stops the clock at 17 minutes, 27 seconds and is divided into 7 parts. The musical landscape of the title track is reminiscent of Ayreon and similar bands that seem to drag your imagination far away from your earthly presence and into some uncharted territory of the universe. While the opening track sets the tone quite nicely, the follow up ‘Don’t Look to Me’ sounds more like a group of teenagers rocking out in their garage with a drummer that can’t quite keep the pace.  So with one good track and one bad track as the opening duo of the album, the question is how does Domain hold up overall? The vast majority of the songs on this album live in blissful mediocrity, they are not bad but they never reach a height that would be required to call them a highlight either. The musical capabilities of the three band members are high enough that, except for the aforementioned ‘Don’t Look to Me’, the tracks show great instrumental ability. This is seen quite clearly on ‘Instruments of Fear’, one of the heavier tracks on the 10 song offering.

In the end, it is a good album that, while it does not offer anything new to the table, gives a reasonably well executed take on established techniques and shows that there is some potential in Scott Mosher, Scott Olivia and Alan Smithee. Hopefully further down the track, Oceans of Night will push their own boundaries as well as the listeners’ expectations and take that step in progressive metal madness. Until that day, Domain will live on as a decent offering to the metal gods and well worth a listen for fans of progressive metal.