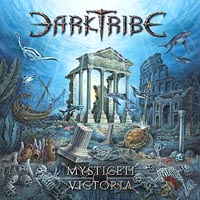 Founded in 2009 by brothers Anthony and Julien Agenello on vocals and drums respectively, the four piece heavy/ power metal band Darktribe hail from France and quickly recorded their “Natural Defender” EP that same year. Before me stands their debut album, an 11 track, almost 54 minute recording that straddles the past with the present forms- as you’ll hear twin guitar harmonies, a mixture of rally cry anthems along with some speedier fare, as well as soaring, multi-octave vocals that appear to stay in the upper range for the most part.

Symphonic elements a la Rhapsody come into play in longer material like the 6:25 “Poison Of Life”, where Anthony appears to morph his vocal lines into two or three different characters and there are blast beat sections that pump up the epic arrangement. Guitarist Loic Manuello appears to be well versed in the traditional and power ways of artists like Running Wild, Hammerfall, and Judas Priest – exerting dynamic control through a mid-tempo anthem like “Eyes Have You” and then injecting the right precision and power for the Stratovarius-ish “Taiji”. Anthony’s voice has nuances of Joacim Cans and Timo Kotipelto throughout- with little trace of his French accent and a firm understanding of proper English enunciation and phrasing.

I wouldn’t consider “Mysticeti Victoria” the most original take on heavy/ power metal- but it does produce a few addictive tracks and enough variety in terms of structures, tempos and melodies to keep me engaged for more than a couple of playbacks. Definitely one for people who miss older power metal with a great does of Priest/ British metal ethics- and a touch of symphonic keyboards for the neo-classical touch- Darktribe keep me curious for their future outings.