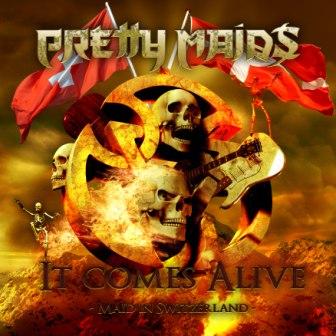 Believe it or not but its actually been 30 years since guitarist Ken Hammer and (still) vocalist Ronnie Atkins formed Pretty Maids. The two Danes still keeps the band fresh and 2010’s "Pandemonium" was a relatively good listening experience.

I remember trying to get into Pretty Maids back in my youth, mostly because the name reminded me of Iron Maiden for some obscure reason. To be honest I did not find them very interesting and moved on to heavier stuff. The band has been off my radar since, but when giving their latest live effort; the double album "It Comes Alive (Maid in Switzerland), a try I was mildly surprised.

First of all, vocalist Atkins still has his good clear voice intact and that alone is worth this albums admission. Combined with the overall pretty good production, the songs flow easily with some crowd cheering added here and there. Pretty Maids have twelve studio albums to pick from and as far as my PM knowledge goes all albums are represented among the 21 tracks. The variation on the material is quite wide, from mellow power ballads to good old heavy metal ala mid 80’s. Included is of course the definition of PM, represented in both the tracks Queen of Dreams from their debut "Red Hot and Heavy" and Savage Heart from their third effort "Jump The Gun".

I remember now why I gave up on PM 20 years ago but some of their songs delivers well and creates a good atmosphere live. They have some crowd pleasing material with some funny ‘sing-along’s’ that I am sure long time fans appreciate. I know they have a unique cult status in Denmark so it’s a little strange why this live album is not from a concert held there. Overall this is an interesting ride down memory lane and even though some of their material sound quite dated I will for sure take a listen to one of their "Best of" albums in the near future.