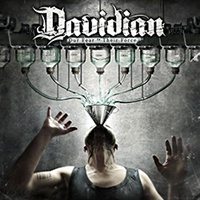 DAVIDIAN – Our Fear Is Their Force

Naming your band after one of the best Machine Head songs of all time is a good start- but will this German act have the songs and performances to back things up? On their third album “Our Fear Is Their Force”, Davidian play a style somewhere between melodic death, modern thrash and metal-core. The guitars and bass coming from more of the former stance, while Tobi Brausch’s vocals bridge the gap between the two and the rhythm section moves from quick double bass kicks to obvious breakdown moments.

The listener feels the aggressiveness and angst within “Desperate Cries” or the faster, Slayer-esque “Fake Society”, but after multiple passes the quintet aren’t versatile enough with their riffing or arrangements to really set themselves apart from the thousands of other crossover groups. It’s as if you put The Haunted, Killswitch Engage, Pantera, and Machine Head in a blender- sprinkle a little In Flames- and there would be Davidian. The contrast between a doom-like first riff and then whiplash double bass thrash on the follow up measure for “Breeding Insecurity” represents possible hope away from conventional mediocrity.

“Our Fear Is Their Force” has more appeal to the youth than the older metal brigade. It’s one thing to be angry, it’s another to convey the varying shades of said emotion into memorable songs- and Davidian aren’t quite there yet based on these 11 tracks. As such, approach cautiously.