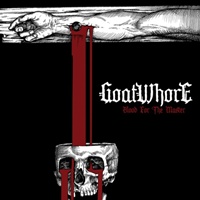 Hyper spastic blackened death/thrash from New Orleans, Louisiana, the four piece Goatwhore have been ascending in popularity with the majority of many North Americans as a result of their four hard hitting albums and numerous touring escapades- including two separate Ozzfest stints in 2008 and 2010. “Blood For The Master” as the band’s fifth album could be their “Slaughter Of The Soul” – there are a number of tracks that will flatten anything within ten feet of its sound waves.

“Parasitic Scriptures Of The Sacred Word” has this Zach Simmons snare-double bass propulsion that teamed up with Sammy Duet’s riff march charge should annihilate audiences from the first second its heard to its conclusion. “Judgment Of The Bleeding Crown” opens with killer blast beats and black metal runs while Louis Benjamin Falgoust II emits his word spew like an attacking venomous rattlesnake- proving you can come at the genre from all angles and still be heard without succumbing to commercial pandering. “Death To The Architects Of Heaven” contains those slight harmonic guitar twinges that made the Bay Area scene so famous- along with the rhythm punch more associated with the melodic death scene. “An End To Nothing” would probably be my favorite of the ten- another addictive opening riff that I defy you to not be swept away with, giving me the chills as one looks back on the excitement and vigor of the underground.

“Blood For The Master” will hit many year end lists in the death/thrash scene. This could be a record to break them on multiple levels – great work gentlemen.