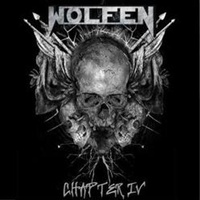 15 years in existence, a series of demos and three full lengths- Wolfen hail from Cologne, Germany and “Chapter IV” is their first studio album in six years. So it’s understandable that the foursome desire to give the listeners as much music as possible- delivering 12 songs with a running time of just over 67 minutes. Stylistically the band cross the lines of old school melodic power with a touch of speed and thrash influence.

Songs like “Netfilm”, the mid-tempo anthem “The One” and more punishing “Unbroken” have as much in common with Mystic Prophecy and Rage as they do with bands like Accept or Primal Fear. Guitarists Frank J. Noras and Bjorn Grune are top flight in their axe skills, peeling off riff after riff plus blistering solos that are mandatory for fluid hair whips and metal signs whether in your home environment or at a live show. Bassist Andreas von Lipinski doubles on the vocal duties, and it’s the one area that may be a touch weaker as a slower song like “Birmingham 6” clearly showcases his limitations above mid-range notes.

Those who love versatile double bass driven power songs coming from more of a traditional slant will find “Chapter IV” very much to your musical tastes. The cultural harmony touches on “Soul Collector” for instance seem in line with what Rage has been doing on their last 4 studio efforts. Even the production has that sharp bite you expect in today’s metal while also keeping the emphasis on Wolfen’s old school approach.

Let’s hope this will encourage a more productive period in Wolfen’s career, as “Chapter IV” is a solid street level album.