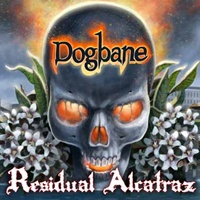 This quintet collectively have 94 years of experience playing in bands previous to this heavy metal meets doom outfit Dogbane. So “Residual Alcatraz” is a labor of love right from the start, with the creativity and performances straight from the early years of metal (and doom)- the mid to late 70’s through early 80’s are on the radar screen for songs like “Annihilator” and the appropriately evil “Devil In The Dark”. Angel Witch, Attacker, The Obsessed, and Pentagram are four bands that come to mind when taking in copious playbacks of “Ride The Serpent” or the epic 9:50 “Burning The Light”.

The vocals of Jeff Neal could be a deal breaker for some- he has that ear piercing high range sustainability a la Alan Tecchio of Hades/ Watchtower notoriety, but I believe can sound a tad monotone when the band play at slower paces. The strength of Dogbane lies in the dual guitar duties of Mitch Allred and David Ellenburg- whether laying down a rhythm against a clean part of doubling up for harmonies, their searing passion comes through as the best UK players of the late 70’s and early 80’s did in their heyday. Remember when guitar playing was about evoking feelings from a few tasty licks and notes versus speedy neo-classical exercises? This album gives you plenty to digest in the former regard- “Fire And Brimstone” being one of my favorites with balancing the main riffs and groove against a decidedly melodic solo.

“Residual Alcatraz” has major appeal for the mid 30’s and above aged metal crowd, but could be a good primer lesson for the younger followers of traditional and doom metal styles.