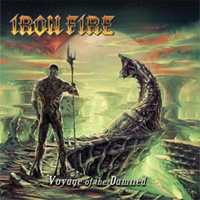 IRON FIRE – Voyage Of The Damned

The seventh album from the Danish power metal quartet Iron Fire continues their renewed sense of productivity, being their fifth studio album of the last seven years. Vocalist Martin Steene may have struggled through the years with consistent lineup changes, but his resolve to keep the quality of Iron Fire’s writing, recording and final product on high remains strong. “Voyage Of The Damned” is a 13 track journey through all facets of the band’s style- one part speedy and keeping in line with power traditions with “Enter Oblivion- OJ 666” but for the most part exploring more epic and traditional mid-tempo lines for songs like “Taken” or “Ten Years In Space”.

The 10 minute plus title track has keyboard accents and a definitive majestic landscape more in line with Kamelot, even taking on additional death growls for an experience not heard to date for most long time Iron Fire fans. The solo work from Kirk Backarach is very emotional and gut wrenching, often using a sparse, slow approach befitting the arrangement. This is another album where I believe the music outshines the vocals though- as Martin still is an acquired taste when he attempts to sustain any high notes. It’s not like listening to Grave Digger, but it’s far from the soaring strength of a Dickinson, Halford or Dio.

“Blade Of Triumph” is the best Iron Fire album for my money, and “Voyage Of The Damned” sits just below that. The foursome emphasis guitar riffs and individual songs over stagnating in the same supercharge tempos that many power acts struggle to get out of. Iron Fire are decent enough I suppose, but not even close to say the latest Riot or Vicious Rumors for my tastes.