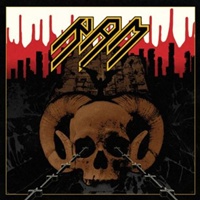 Another of the newer Swedish traditional/power metal brigade, Gothenburg’s RAM unleash their third full length but first with their newest label Metal Blade, which should hopefully improve their standing within the scene. Musically “Death” resonates with the early to mid 80’s scene, as much of the guitar harmonies, interplay and shuffling tempos in the rhythm section remind me of early Mercyful Fate, Iron Maiden and others in that epic and forceful yet abundantly energetic scene.

“Frozen” lives within the Dio-era Rainbow meets Black Sabbath feel for a 6:47 doom-laden ballad, as Oscar Carlquist sends chills in the airwaves with his shrill, high pitch delivery against the axe harmony accompaniment. Other songs sure to develop instant head banging approval include the early Twisted Sister-ish “I Am The End” and the up tempo rebel rouser “Under The Scythe” where Morgan Pettersson double bass/ snare groove goes hand in hand with the machine gun fire six string tandem rhythms and accents from Daniel Johansson and Harry Granroth.

The tones and production values scream 1983 as well- razor sharp in full command of the metal mission at hand. A vast step up from 2009’s “Lightbringer” for my ears, they are much more focused on the fire and brimstone NWOBHM scene than say contemporaries like Wolf or Steelwing. RAM doesn’t possess the smoothest, note-perfect vocalist- but Oscar’s charisma and unwavering commitment to wrench out pain or evilness no matter the arrangement gives the band individuality in a flooded traditional scene.

An ideal soundtrack to any denim and leather party gathering, “Death” should be an easy sell to gather more of an audience when they perform live- the roots of metal reverberate again!