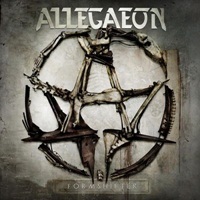 Can lightning strike twice for Colorado’s Allegaeon? Their 2010 “Fragments of Form and Function” debut album astounded with its twin guitar harmonics and musicality amidst the blend of intense, Scar Symmetry-ish death style on display. To not lose fan interest, the second record “Formshifter” hits the streets fairly quickly, which could be a positive or negative depending on the songwriting and creative nuances that take place in a younger band’s development.

Guitarists Ryan Gilsan and Greg Burgess as a tandem are bent on fusing all of their technique and theory experience into uncompromising bursts of extreme speed harmonies and often tranquil moments of sparse introspection. Take a gander at the clean introduction to “A Path Disclosed” before the duo go off to the fret burning races- letting the picking and chord work fly as if they were playing for their last supper- a beautiful display of Scandinavian melodic sensibilities next to American aggressive propulsion techniques. Session drummer JP Andrade gets quite a workout handling all the punishing groove to blast beat and back again timing/ tempo changes from track to track- some of his best work turning up with bassist Corey Archuleta on the slightly down tuned “Iconic Images” where the last three minutes of this epic 7:11 arrangement include a thoughtful classically driven acoustic guitar piece.

Even when things appear to be on another planet, such as the incredible lead during “From the Stars Came Death”, the rhythms maintain this sensible deep groove that other modern death metal acts can’t develop like Allegaeon- coupled with Ezra Haynes screams from the grave approach, it’s quite intense with multiple dynamic waves to handle. Everything about Allegaeon appears to be more of an intelligent approach to their music- in all aspects- while also knowing how to write songs, not just a boatload of riffs shuffled together at rehearsal without a discriminate ear in the bunch. The title cut contains more of their multi-layered, rhythmic bottom end hypnotic death rumble that will surely evoke limb movement across many a stage as the band tours.

“Formshifter” will not disappoint the modern death audience, but could gain some of the progressive minded because of the wealth of mind blowing guitar escapades on display. Bravo, Allegaeon, bravo!