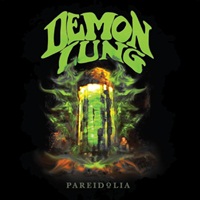 Las Vegas may be best known for its top flight entertainment and high rolling, gambling atmosphere- but the quartet Demon Lung call this city home and want to be the number one option for doom metallers based on this four song “Pareidolia” EP. The slower note bends, low tuning and intense vocals of despair give “Lament Code” and “Death Mask” a killer 70’s meets 80’s atmosphere, channeling the better aspects of original Black Sabbath and the crawling classically-tinged Candlemass.

Vocalist Shanda Fredrick has a potent set of lungs at her disposal, wrenching out every sad or depressive emotion out in a psychedelic, unconventional manner. Drummer Jeremy Brenton and bassist Patrick Warren keep the low end and groove forward, not as easy as it seems playing at such plodding paces. The final title cut for instance plays off a series of similar evil chord progressions- and the duo change up between straightforward power parts with occasional double bass emphasis and the European metal ethics. And who can forget the axe mastery of guitarist Phil Burns- who often leads the charge with riff after riff that sear your soul.

Picking through two albums worth of material, “Pareidolia” doesn’t wear out its welcome in 22 minutes. The four-piece has shared the stage with luminaries past and present, from High On Fire to Pentagram. While it may be a slow climb to headlining status in their home country, in other distant lands where doom metal is a way of life Demon Lung should be selling like gangbusters. This isn’t stoner rock or funeral dirge music- it’s the classic doom the older folks grew up on and still cherish today.