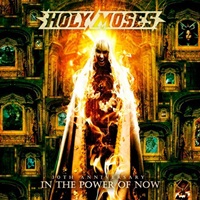 Vocalist Sabina Classen has been the ‘female voice from hell’ since late 1981 with the German thrashers Holy Moses- and with her 30 years now running with this act, it’s fitting to pay tribute to the historical side with this 22 song, double CD offering. 2 new songs “Borderland” and “Enter The Now” sit beside the 20 re-recordings of material from the early years of the group. For those not in the know, Holy Moses style is in your face with little regard for commercial aspirations. Sabina’s voice is raw, raspy and full on metal- she can give many a guy a run for their money in severe throat abuse.

Right from the “Clash My Soul” hyperkinetic start, Holy Moses has always been a band who seemed to add crossover Americanized gang vocals to their otherwise straight ahead thrash and bash style- not as melodic as say Kreator but also not as punk-influenced as Sodom. Highlights include the rabid “Reborn Dogs”, the Slayer-esque meets slightly tech guitar twisted “Panic” and the aforementioned newbie “Borderland”.

This one would be for the lifetime Holy Moses fanatics- of which I’m not a member. The riffing is scattershot in quality at best, and when the band slows down for the majority of the six minute “Lost In The Mace”, you truly feel like you’ve been gassed and can’t recover. The digipack will have extensive liner notes and exclusive historical photos- but I’ll stick to early Kreator, Destruction, or even Darkness when I need my fill of German thrash.