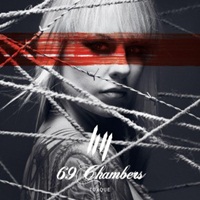 Second album from this Swiss trio 69 Chambers who have shuffled around certain musical duties but not lost any potency in their heavier post-modern meets alternative metal style. Vocalist Nina Treml takes over on bass, as Coroner guitarist Tommy Vetterli decided to tackle both production and six string tasks while Diego Rapacchietti pounds the drum kit.

Some of the tracks are more intense vocally and musically (death screams and blast beats in “Anhedonia”, occasional thrash meets melodic death riffing for “And Then There Was Silence”), but for the most part 69 Chambers align themselves with Disturbed meets Soundgarden and Machine Head if all three met in a dark alley, with Nina’s chameleon capabilities at the forefront- serene and pretty one moment, then erupting from the bowels of the earth in the next.

The electronic loops that open “Ring A Bell” set up the song’s hypnotic, echo groove nature. Tommy’s years of experience come into play throughout, his riffing syncing up to the free flowing Diego rhythms- the best example being “The Doom Of Her Power”. Major drawback again comes into the 14 track, 64 minute totality- artists would be well advised to really siphon out the best 10-12 cuts as it can be tedious to take in “Torque” all in the same sitting.

Another record that probably resides comfortably in the hands of our youth- those who are disgruntled, unsure of their stature and struggle to make sense out of their lives will relate to the aggression mixed with tranquility 69 Chambers brings to the table.