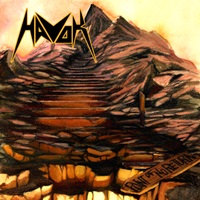 HAVOK – Point of no Return (EP)

The life of a young thrash band like Colorado’s Havok circa 2012 appears to be travelling as much as you can, promoting your songs in front of any and all live metal audiences you can. “Point Of No Return” is a 4 song EP consisting of two new tracks plus covers of Sepultura and Slayer material- just in time for more road work with Death Angel, Sepultura, Krisiun, 3 Inches Of Blood, and Goatwhore on their next two touring jaunts for North America and Europe.

The title track features a throbbing bass line, crunchy main rhythm work and accent harmonies that should strain many a neck when Havok assault people with this in a live situation. “Cradle To The Grave” spotlights the talented tempo tangling / double bass skills from drummer Pete Webber as well as the ability of the band to write some killer mid-tempo parts with gallop. As for the covers? “Arise” is as potent today as I remember Sepultura delivering this back in the early 90’s- one of my favorites to hear when they opened for Ministry and Helmet on that tour- and “Postmortem/ Raining Blood” from Slayer remains respectable, but it’s so difficult to duplicate the intensity and tone of one of the ultimate in big four American thrash.

With hopes for album number three to hit the streets at some point in 2013, Havok could be one of the bands to survive this younger generation thrash resurrection- they are able to write memorable riffs with substance and have a razor tongued vocalist to boot. A pleasant stop gap offering, “Point Of No Return” showcases Havok’s varied thrash influences and proves you don’t have to be from the Bay Area or the East Coast to deliver killer music.