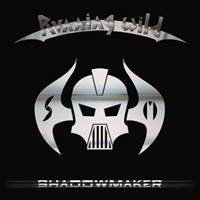 Who thought Rolf Kasparek would really retire Running Wild to the wasteland following their Wacken 2009 final show? Creative inspiration and idle time to think things through usually encourage musicians to pick up their instruments, let the riffs and songs flow and eventually recruit a new lineup to solider forward. “Shadowmaker” is the fourteenth and latest Running Wild studio album, coming off a series of records that were met with critical indifference with “The Brotherhood” in 2002 and “Rogues En Vogue” in 2005. So will “Shadowmaker” place these German power metal veterans back on the map- or is this another case of material that would have been best served to lay dormant in master tape archives?

After numerous playbacks, “Shadowmaker” will probably satisfy more of the long-term Running Wild follower than gain any of the younger generation discovering traditional power metal bands. Opening without a prolonged intro, the mid-tempo anthem “Piece Of The Action” is an early highlight due to the addictive riffing and Ralf’s comfortable melodies, as the chorus lodges itself in my brain and hasn’t let go- which the best power numbers always ensure. As the album rolls along, you get the feeling that the band is comfortable churning out material designed for optimum festival call and response outcomes- “I Am What I Am” and the Judas Priest –like “Locomotive” two of the easiest examples that help me picture denim clad audiences whipping their hair around in a frenzy to these songs.

“Sailing Fire” contains a thick bass groove which mutates into a series of cultural thematic guitar lines and melodies – drummer Matthias Liebetruth keeping his parts in the pocket to allow the dual Kasparek/ Peter Jordan harmonies to become the showcase in Running Wild excellence. The album closes with the longest cut “Dracula”- a 7:36 arrangement that opens with bells and rainfall and pulsates with this driving refrain in the classic Randy Rhoads meets Vivian Campbell mold. Everything I’ve come to expect regarding Running Wild is here- they haven’t attempted to modernize any aspect of their style or sound- what you hear in 2012 is what Running Wild have been like throughout their traditional minded career.

To me, “Shadowmaker” is their best effort in at least a decade. It’s not “Death Or Glory”, but comes close to the brilliance of “The Rivalry”, with more focus on straight ahead music and less pomp or bombastic tendencies.