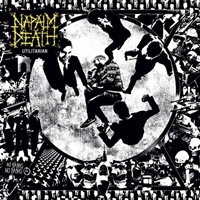 My first experience with this UK grind core act was back in 1990, during the surfacing of their third album “Harmony Corruption”. A few years later I would take in a live show on the “Diatribes” tour, but it’s been a while since I’ve experienced a full length studio offering from Barney Greenway and the gentlemen of Napalm Death. Three decades into their career, it’s fairly obvious that the band aren’t going to succumb to any outside pressure in terms of their compositions or stylistic variances. That’s the Napalm credo- extreme music for extreme fans.

“Utilitarian” lyrically tackles loads of social, political and cultural issues facing the public today- be it the environment on “Order Of Magnitude”, freedom of sexual/ gender expression on “Gag Reflex” or the arms trade with “Fall On Their Swords”. As the band get older, it appears they are balancing out their blasting tendencies on songs like “Quarantined” or “Think Tank Trials” with more of a hardcore rhythm and groove outlook- easily noticeable on the mid-tempo “The Wolf I Feed” and “Analysis Paralysis”. The curveballs continue with a guest sax appearance from John Zorn with “Everyday Pox” and the clean choral elements during the bridge of the aforementioned “Fall On Their Swords” which are atmospheric in a Fear Factory way.

Barney’s voracious growl still represents one of the most feared to ever take the microphone in extreme metal. For me, the average material outweighs what few highlights I hear on “Utilitarian”- which if you must know include the ferocious “Errors In The Signals”, the 82 second “Opposites Repellent” and the eerie vocal ambiance against a plethora of Mitch Harris guitar lines/ riffs which makes “Leper Colony” a standout.

Too much of a hardcore feel equals a see-saw Napalm Death outing, so beware as “Utilitarian” is not your previous generation’s underground champion.