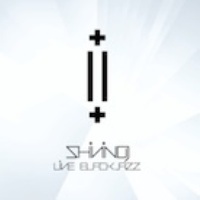 ‘Live Blackjazz’ does almost exactly what it says on the label: it is just about the entire 2010 album ‘Blackjazz’ played live. For those who, like me, haven’t met Shining before, expect a frenetic mix of experimental jazz with a heavy dose of industrial and extreme metal influences.

Musically, I have found this a difficult offering to get my head around. Parts of it are pure genius – exciting, stimulating, highly original and above all, memorable. I love the fearlessness and how willing the band are to throw themselves into the abyss, completely committing to each piece. I love the cool sophistication mixed with manic, blastbeating fervour. I love the fact that this band is nominated for both metal and jazz awards and the ridiculous levels of musicianship to be found in Shining. I even love the fact that I share the same surname as the drummer, although my name has lost the Norwegian ‘H’!

On the negative side, I found this album sometimes veered a little too far into ‘bad trip’ territory. The noise influences, such as extremely short, fast phrases repeated for over 16 plus bars, the sometimes headache-inducing shrieks of the saxophone and the repetitive, industrial nature of some of the songs for example. What it means ultimately is that while there are parts of this release that will plant your jaw on the floor, it can be a little grating and repetitive at other times. But having said that, there isn’t a thing you would want to change about this band. They are so original and possess such character that it would be a crime to even suggest such a thing.

As a live piece, ‘Live Blackjazz’ captures the exhilarating vitality of the band excellently. Yes, sometimes their restraint in the studio can help build tension, whereas here that is mostly exchanged for power and schizophrenic energy here. The songs are all nicely interpreted and even extended and explored in some cases. Visually, the band stick to a classy, well-produced club look. Kind of makes you wish you were standing in the crowd sipping an expensive vodka and feeling intelligent and demented for just being there…