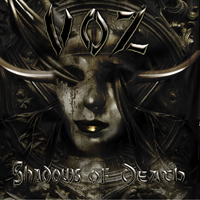 Central Florida’s Voz are a power metal quartet in the vein of Iced Earth, Cage, and others of that double bass, soaring mid-range and higher vocal troop- releasing a 10 song debut album in “Shadows Of Death” that may appeal to the older generation. Guitarist Shane French previously played in Jon Oliva’s Pain and Circle II Circle among others- and the Voz lineup also includes former Teer drummer John Teer, bassist Raven Blakkwell and vocalist Morrie Vozdecky- with guest soloing appearances from Pete Blakk of King Diamond and Dave Garcia from Cage.

Songs like “The Happening” and “Run” have the persistent double bass kick fueling the power riffs and menacing metal vocals, giving the listener a sense of early Iced Earth careening headlong into Seven Witches. The production and tones appear to be very primitive and occasionally hollow, as I’m not a big fan of the synthetic, typewriter sounding bass drums. Another aspect that can be hit or miss is Morrie’s maniacal melodies- he has the personality of a Lizzy Borden but can’t hit the James Rivera highs without screeching, making certain parts on the otherwise blistering “Coldness Of Night” like nails on a chalkboard painful.

“Shadows Of Death” certainly has enough muscle in the riffing and solos that will make most traditional power heads satisfied. I think they need to really work on keeping the vocals more in check- or Morrie needs some more training to stay in key- for the future of this band to gain support beyond a cult following. Let us keep Voz on the back burner, they need to simmer their approach a bit more to move up to the Helstar or Cage ranks.