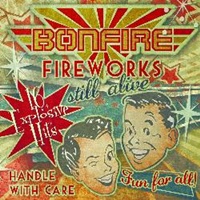 Brought to life once again, the bulk of this live album from Germany’s Bonfire focuses on their second studio effort, 1987’s “Fireworks”. Out of the 16 songs, 10 of them are from this gold selling record, along with “You Make Me Feel” from their debut “Don’t Touch The Light”, “Sword And Stone” from the Wes Craven movie “Shocker” that originally came from the “Point Blank” recording sessions, and a couple of new songs from their latest album “Branded”.

The special treat on this album is a guest appearance from Steve Lee (R.I.P.) on the ballad “I’m On My Way” – the melding of older European hard rock ethics with the magnificence of a stellar, one of a kind voice lost far too soon for the world. Lead vocalist / guitarist Claus Lessmann and lead guitarist Hans Ziller have been performing together for over 33 years now, and I believe the older songs like “Ready 4 Reaction”, “Sleeping All Alone”, and “Sweet Obsession” still stand the test of time, based on the enthusiastic response that these audiences from Sweden to Switzerland, Romania to the Czech Republic and their homegrown Germany give.

They may not have been the flashiest group through the years, and some may believe Claus’ limited range hurt their chances for bigger commercial appeal- and yet there’s something appealing about their gritty, blues based melodic hard rock sound. “Fireworks… Still Alive!” proves Bonfire isn’t ready to be put out to pasture, and as such makes me want to delve into their back catalog to complete some of the holes I have.