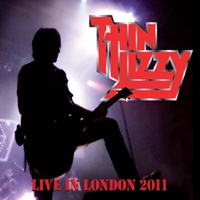 I don’t mind people keeping the spirit of this Irish band’s music alive- but I question the validity of calling this Thin Lizzy without Phil Lynott fronting the band. The Almighty’s Ricky Warwick handles the vocals admirably, and mainstays Scott Gorham on guitar and Brian Downey on drums plus keyboardist Darren Wharton give this incarnation of Thin Lizzy plenty of musical weight- so prepare yourself for a 19 song journey celebrating this group’s harmonies, ballads, exemplary chemistry and ability to connect to audiences.

Favorites include “Dancing In The Moonlight”, the extended “Bad Reputation”, “Angel Of Death” from the early 80’s Lizzy days and of course two tracks that influenced many dual guitar metal teams- “Massacre” and “Emerald”. The ballad “Still In Love With You” possesses one of the best lead breaks of all time, an amazing exercise in how to carry the listener with sparse notes and then build up the process to where the dual harmonies just explode your speakers.

What is so special about Thin Lizzy anyway? They were one of the 70’s acts unafraid to incorporate outside influences and make them sound seamless to their style. Be it country for “The Cowboy Song” or natural domestic anthem strains in the closer “Black Rose”- Phil Lynott and the boys knew where to put their heads and hearts together for the sake of moving people musically and lyrically. My only disappointment with “Live In London” would be no tracks from “Thunder & Lightning”- “Holy War” or “Cold Sweat” would have just made this that much more essential.

In the end though, collectors will scoop this up- and the uninitiated should as well. Proof again that great music remains timeless.