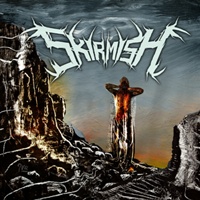 SKIRMISH – Through the Abacinated Eyes

Born in 2005, the self-proclaimed bulldozer of heavy metal known as Skirmish hit the Finnish scene with their furious brand of thrash with death leanings and after three demo and EP releases release their debut album. This four piece have a love for the fast and furious, leveling the listener with guitar, bass and drum lumber salvos bigger than two by fours on winning tracks like “Conquest” and “Death Beyond”. Vocalist Jani Niskanen floats between a low growl and maniacal scream depending on the feel and pacing of the song- even entering into whispering moments during the adventurous “Astral Infinity” which has a little bit of slower Coroner musically to the mix.

If I had to think about some of their influences, they take a lot of the Bay Area movement such as Heathen and Vio-lence and mix in the German twin towers of Destruction and Kreator- but the vocals definitely put them in more of a brutal side that many thrashers won’t appreciate. I love the stair step to circular picking motions throughout the energetic “Premonition” opener as well as the militant slower death march within “Mystery In A Blazing Dream” that reminds me of “Low” and “Demonic” era Testament.

If there’s one blemish on this package, it would have to be the cover art- which looks natural enough I suppose but doesn’t really cast as professional a vision as the music portrays immediately on first listen. There are some people who really do judge the book by the cover, so hopefully Skirmish will gain more initial impressions with listeners rather than visual oriented individuals. Nevertheless, this 8 song album doesn’t overstay its welcome, and should provide plenty of frenetic excitement around the metal scene.

And it’s not everyday a metal band can make me look in my dictionary for the word abacinated (definition- to blind by a red hot metal place held before the eyes).