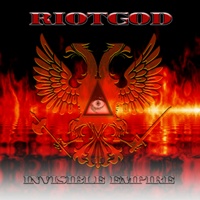 The rhythm section of Monster Magnet Bob Pantella on drums and Jim Baglino on bass formed this group in 2007, filling out the lineup with Garrett Sweeny and local New Jersey connection Mark Sunshine on vocals. “Invisible Empire” is their second studio album, a 12 song excursion into the lands of stoner hard rock and slightly doom-laced metal. “Tomorrow’s Today” conveys this dark Danzig despair with Mark holding out a killer final ‘today’ in his best Sabbath meets Jackyl/ southern rock drawl. Most of the songs stick to simplified, down tuned riffing and thick grooves that bring your headspace back a good 35 years- opener “Breed” and “Slow Death” being two of the best examples of their comfortable, laid-back and heavy style.

The second half of the album has the stronger material- the nine minute “Hollow Mirror” giving the four piece the chance to stretch organically and jam a little bit through the instrumental sections. Where this band struggle is in the vocal melody department- it’s not like Mark can’t hit the notes from low to high. There are times where within say the verses of “Crossfade” where certain refrains or note holding measures just sound odd or out of place based on the chord sequences. Riotgod aren’t stuck in similar sounding, plodding drum tempos- there’s plenty of power behind the dynamic “Saving It Up” and Soundgarden-esque “Fool” to give them an edge over most stoner rock/ metal acts.

“Invisible Empire” creates an uneven proposition in my mind for full recommendation. I’d love for Riotgod to lose the occasional Alice In Chains leanings and stick to their obvious dark riff/ groove combinations that probably win over club audiences. It’s not Monster Magnet, it’s a distinct brand of slower stoner rock/metal with Mark’s aggressive and impressive range giving them their own flavor.