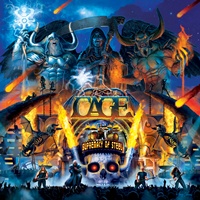 Sixth album from the traditional metal force out of San Diego, California Cage- “Supremacy Of Steel” isn’t an effort for non-believers. This 12 song recording comes out swinging from the high pitched Sean Peck screams and blast beats within opener “Bloodsteel” on through to the 2:57 closer “Skinned Alive” with sinister chants and pulsating dual guitar workouts from Dave Garcia and Steve Brogden. Through the years Cage haven’t lessened their attack- they’ve incorporated aspects of black metal, power, and thrash into their sound, as Sean has added a King Diamond-like falsetto to his normal repertoire of James Rivera/ Rob Halford precision and high pitch edge.

Highlights include “King Of The Wasteland” with some of the best drum dynamics out of ex-Psychotic Waltz percussionist Norm Leggio and this searing riff/ vocal melody playoff that builds the arrangement to anthem excellence and “Flying Fortress” which could have easily been a sister cut from “Painkiller”. Marvel Comics artist Marc Sasso delivers killer artwork throughout, giving the consumer as much of a visual experience as you will hear bursting through your speakers. In an age and time period where record companies are tightening the production values and forcing artists to do more with less, Cage are willing (and able) to deliver a top notch product for their fans- an admirable quality that ensures a fervent fan base.

2007’s “Hell Destroyer” remains my favorite Cage disc to date, but I’m sure with another month or so of exposure “Supremacy Of Steel” could usurp that album as my favorite in their discography. “Annaliese Michel” is a 7:14 epic that rivals King Diamond in his “Abigail” prime- and it’s nice to hear the prominent bass work of Pete Stone to punctuate the appropriate darkness the song conveys. Cage know their style- and their audience plus dynamic musical talent keeps delivering solid albums again and again.