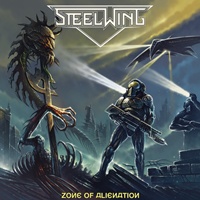 The traditional metal movement consistently needs a healthy infusion of younger acts willing to set the bar in terms of songwriting, performance and attitude to ensure its future vitality. During the late 70’s and early 80’s the bulk of acts resonating with fans resided in the UK. During the mid to late 80’s, America and mainland Europe took over. Even during the 1990’s the fervor of traditional metal spread to South America. Over the last few years, Sweden seems to be the front runner with a multitude of musicians strapping on their Flying V’s, grabbing the denim, leather, and chains intent on not just reliving past glory but making their own mark in the international scene.

Which brings us to the Nykoping/ Stockholm five piece Steelwing- who in three short years have won critical favor with their debut album “Lord Of The Wastleland” and also opened for some significant European tours with Blind Guardian, Sabaton, and Accept among others. “Zone Of Alienation” is the follow up, an 8 song plus intro that surprisingly doesn’t suffer the dreaded ‘sophomore slump’ syndrome that could plague a youthful band capitalizing on early appreciation.

These gentlemen take care and consideration into the writing of this material- all of the lead play having forethought and high standards to accent the arrangement at hand- not merely a flurry of Slayer/Yngwie like notes for ego gratification. Riley’s vocals give Steelwing the chance to go to the stratosphere in the title track while also serving a solid, mid-tempo like personable comfort in the more straightforward, glam-like “Breathless”. The dual guitar team Robby Rockbag and Alex Vega give their axes a sinister workout, reliving the glory days of Iron Maiden instrumentals on “They Came From The Skies” with both lead and rhythm parts that provide separation and melodic depth when combining their metal skill sets. Rounding out with Nik Savage on bass and Oskar at the drums adept at various tempo changes and speed pacing, Steelwing make you think of artists like Iron Maiden, Judas Priest, Raven, and possibly early Wolf- with crystal clear current production values to make you scream with the songs instantly.

Favorites include “Solar Wind Riders” that has guitar acceleration and vocal harmonies straight out of 1985 and the epic “Lunacy Rising” closer that mirrors the vibe first heard from Iron Maiden on their debut album with “Phantom Of The Opera”. Combining this with a futuristic, sci-fi concept surrounding most of the lyrical topics and this is a record tailor made for those who want excitement and escapism in their entertainment. I predict a very productive metal discography for Steelwing based on their first two albums- they seem to have a good team of people behind them to make headway in all parts of the globe.