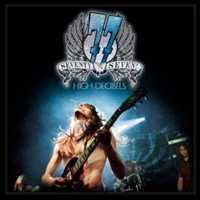 A duo of guitar playing brothers, Gibson SG’s firing off hard bluesy rock and roll, with one of the brothers conjuring up the spirits of Bon Scott with a twinge of early Joe Elliot. With a name like 77, it’s easy to tell we aren’t dealing with a four piece who live for the modern era of music. This Spanish band on their second album “High Decibels” create 11 songs that would make any 70’s AC/DC fan proud, as LG Valeta spits out some fine lead licks and his brother Armand holds down the rhythm guitar fort while also injecting that special bar boogie persona in the vocals that made the Australian group superstars. The twosome wouldn’t sound so sensational without the capable rhythm section of bassist Mr. Raw and drummer Johnnie Dolphin- check out “Gimme A Dollar” and the four on the floor “Meltin’ In A Spoon” for best aural proof.

The surprising track on here would be the jam worthy “Promised Land”- a mammoth 8:31 arrangement that begins at a slow, almost ballad like pace for the first half of the song and then kicks into fifth gear for an energetic vocal refrain and rabble rousing six-string action guaranteed to send audiences mad with appreciation. Otherwise most of what you get from cuts like the fiery title track opener or the swanky “Backdoor Man” is requisite AC/DC styled rock, liberally borrowing from anything they’ve cut in the studio in the 70’s. 77 aren’t re-writing history books- they merely want to keep the spirit of the Bon Scott era alive, the sound that millions gain access to as probably their first gateway band to this heavy electrical movement.

If there’s room for Airbourne, there certainly is space for 77. Grab a few pints and succumb to “High Decibels”.