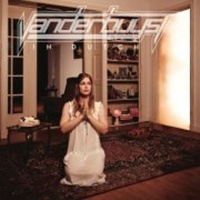 One of the European hard rock acts who received quite a buzz last year is this Dutch three piece- capturing a raw, rough and ready sound that resonates with 70’s hard rock maniacs and NWoBHM fanatics combined. Guitarist Willem Verbuyst, bassist/vocalist Jochem Jonkman and drummer Barry van Esbroek produce a fun loving, addictive style that focuses on instantaneous licks and subtle jamming on said chord progressions guaranteed to get your whole body into a Thin Lizzy, UFO, ZZ Top or Black Sabbath frame of mind.

Some may think “In Dutch” is hitting the streets too soon after last fall’s self-titled debut, but my belief is this trio want to give their fans as much music as possible without the record company politics that are involved in prolonged absences from the marketplace. In the old days their heroes would come out with new records every 6-9 months- so what’s wrong with every 12 months? The 8 songs on this second outing continue in a similar fashion as “Tiger” and “Stealing Your Thunder” off the previous recording. There’s a bountiful mix of up tempo material like opener “Black And Blue” and “KGB” next to their comfortable mid-tempo offerings like “Into The Fire” or “Reap The Fields”, while you get some Thin Lizzy-like swing in the riff and drum moves of “String Of Beads”.

Jochem’s phrasing and smooth delivery has that Phil Lynott comfort while Willem certainly could be one of the guitar heroes to a new generation, using his platform to not necessarily prove he’s the fastest shredder on the six string but more of an all encompassing threat. Vanderbuyst will never be mistaken for pristine production values or the latest technological innovation. They are as blue collar as you can get- and their fans wouldn’t want it any other way.

Another great release from the band- this should lift them into headline status across Europe and hopefully allow Vanderbuyst to make inroads in other scenes.